New York, August 14, 2006—A Brazilian television reporter abducted by a São Paulo criminal gang was released unharmed today after his station broadcast a message by the kidnappers denouncing prison conditions.

Calado was freed late on Saturday with a recorded message by the gang demanding improved conditions for prisoners in Brazilian jails. The kidnappers warned Calado that Portanova would be killed if TV Globo did not broadcast the message. TV Globo aired the three-minute tape on Sunday of a masked man who identified himself as a PCC member. 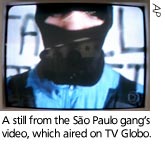 “While we are concerned that these kinds of kidnappings could continue, we sympathize with our colleagues at TV Globo who faced an impossible dilemma,” said Joel Simon, executive director of the Committee to Protect Journalists. “We are relieved that our colleagues Guilherme de Azevedo Portanova and Alexandre Coelho Calado have been released unharmed and we call on the authorities to bring those responsible for their kidnapping to justice.”

Portanova covered a wave of attacks by the PCC in São Paulo in May. The PCC was formed in 1993 by prisoners in São Paulo’s overcrowded and violent prisons, but today is involved in criminal activity throughout São Paulo, according to the media. In May, PCC protests against a plan to transfer jailed gang leaders from the city to a remote prison left more than 200 people dead.