New York, June 16, 2006—The Committee to Protect Journalists is greatly distressed by reports that abducted Pakistani journalist Hayatullah Khan has been found dead. International news agencies reported that Khan’s body was found today by villagers in the North Waziristan town of Mir Ali, from where he was abducted on December 5.

Local government officials and family members told journalists that Khan had been shot in the back of the head, probably on Thursday, and was in handcuffs. He appeared frail and had grown a long beard since he was last seen, Pakistani journalists told CPJ. Khan disappeared after reporting that an al-Qaeda commander had been killed by a U.S. missile, contradicting official Pakistani accounts of the death. 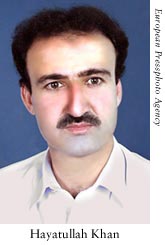 “The abduction and killing of Hayatullah must be fully explained. This is a Pakistani journalist murdered in Pakistan, and we hold Pakistani authorities fully responsible for carrying out a vigorous investigation, and prosecuting the perpetrators of this terrible crime,” said Ann Cooper, CPJ’s executive director. “This is a tragic loss, and our hearts go out to Hayatullah’s family and friends.”

Khan was grabbed by five gunmen men who ran his car off the road in North Waziristan, near the Afghan border, as a younger brother, Haseenullah, watched, unable to help. The day before, Khan had photographed the purported remnants of a U.S.-made Hellfire missile which allegedly killed a senior al Qaeda figure from Egypt, Hamza Rabia, in Miran Shah, the tribal region’s main town, on December 1. The pictures—widely distributed by the European Pressphoto Agency on the same day they were shot—contradicted the Pakistan government’s explanation that Rabia died in a blast caused by explosives located within the house, and not from an aerial attack. International media identified the fragments in the photographs as part of a Hellfire missile, possibly fired from a U.S. drone.

Khan, who was also a reporter for the Urdu-language daily Ausaf, had received numerous threats from Pakistani security forces, Taliban members, and local tribesmen because of his reporting.

In April, CPJ called on U.S. and Pakistani authorities to reveal all information they had on Khan after his family claimed that he was being held by the United States. Both the Pentagon and FBI denied holding the reporter. One of Khan’s brothers said he had tried more than 30 times to contact Pakistani officials for information about his brother but without success.

One of Khan’s journalist colleagues told CPJ in March that Khan had told his mother that the Pakistani government was threatening him. He had been told to leave journalism or move from the region, or accept a government job there, which would effectively silence him. And in July 2002 Hayatullah and four companions were detained by U.S. Special Forces in Paktika province in Afghanistan on suspicion of being associated with al-Qaeda. The group was released after the military was able to verify their identities.

The Pakistan Federal Union of Journalists has called for countrywide protests on June 17.