The book release was widely covered in the domestic and international press. The preface by CPJ chairman Paul Steiger received particular attention. To read the book online, click here,

CPJ urged Internet companies to put principles ahead of profits in China in written testimony submitted on February 15 to the Congressional subcommittee on Africa, Global Human Rights and International Operations. CPJ called on U.S. Internet companies Yahoo, Google, Microsoft and Cisco to use the leverage afforded them by superior technology and market dominance to resist demands made by governments such as China seeking to censor information or identify and persecute those who exercise their right to free expression. The testimony said that in the last year alone CPJ has documented Internet censorship in 22 countries, including Tunisia, Iran, Vietnam, and Nepal. “Yet none raises as much concern as China, where the government has imprisoned at least 18 Internet writers,” Ann Cooper told the subcommittee. Washington Representative Frank Smyth and Asia Program Coordinator Bob Dietz attended the hearing in Washington, D.C.

To read a copy of CPJ’s testimony, click here. 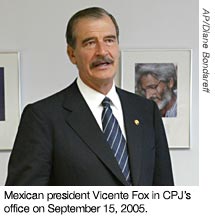 At the urging of CPJ, Mexico creates special prosecutor for crimes against the press

On February 8, the Mexican government announced that it would name a special prosecutor to investigate crimes against journalists. The news came two days after gunmen stormed a newspaper office in the U.S.-Mexican border town of Nuevo Laredo, seriously wounding one reporter.

The announcement was long anticipated. President Vicente Fox pledged in a meeting with CPJ in New York in September that he would seek to create the position in response to a wave of murderous violence against the media in the northern states. CPJ had urged the appointment after its research found that northern Mexico had become one of the most dangerous places in Latin America for journalists. The finding was further borne out on the night of February 6, when two unidentified men fired assault rifles and hurled a grenade at the Nuevo Laredo daily El Mañana. Reporter Jaime Orozco, who was wounded in the attack, was in stable condition following surgery.

To read more about the special prosecutor, click here,

With a newly accelerated schedule in place, many programs have already completed missions this year including

• Senior Middle East Program Coordinator Joel Campagna had a productive trip to Yemen with board members Clarence Page and Dave Marash in January where they met with journalists and government officials including Prime Minister Abdelqader Bajammal. The CPJ delegation expressed alarm at the deteriorating climate for the press including a restrictive draft press law currently before Yemen’s parliament.

• Senior Program Coordinator Alex Lupis traveled to Belarus for four days in February to meet with the beleaguered independent press there. Lupis then traveled to Moscow to hold a press conference, because restrictions on the Belarusian press would have limited coverage. He accused the Belarusian government of persecuting the country’s few independent newspapers and thereby undermining the integrity of the upcoming March 19 presidential election.

• Americas Program Coordinator Carlos Lauria organized a workshop in Santiago, Chile’s capital, between January 23 and 24. The workshop focused on the elimination of bad press laws in Latin America, how different organizations and journalists can use the Inter-American system, and analysis of emblematic cases and trends in the region. The meeting was attended by representatives of several groups and journalists that have formed a broad coalition to fight against these issues.

• In February, Senior Editor Robert Mahoney went to Istanbul to monitor court proceedings against five journalists charged with attempting to influence the outcome of a trial through their writing and publicly denigrating Turkish identity and the institutions of the Turkish state. The freedom of speech case received intense international attention because of Turkey’s application to join the European Union. After two hours of chaos in the courtroom, the trial was adjo|urned until April. If convicted, the five journalists could face prison terms of six months to 10 years.

• Also in February, Executive Director Ann Cooper spoke at the Joan Shorenstein Center on the Press, Politics, and Public Policy at Harvard’s John F. Kennedy School of Government about international press freedom issues including the dangers facing journalists in Iraq to the Shorenstein fellows, staff and guests.

STAFF NEWS
• Heidi Hoogerbeets has joined the Development staff as CPJ’s Development Assistant. Heidi recently graduated from Hunter College with a degree in Russian and Political Science. She spent five years working as a professional dancer and studying academic and artistic disciplines at the St. Petersburg State University in Russia after graduating from the Kirov Ballet Academy in Washington, D.C.