New York, August 25, 2005—The editors of Nepal’s two leading daily newspapers believe police plan to arrest them for their coverage of political unrest in the Himalayan kingdom, whose leadership has imposed widespread curbs on press freedom this year.

Narayan Wagle, editor of Kantipur, and Prateek Pradhan, editor of the Kathmandu Post, were told by government sources that authorities were laying the legal groundwork for their arrest.


This was in retaliation for coverage of protests against King Gyanendra, and for a political cartoon that ran on the front pages of both newspapers on Sunday depicting the constitutional monarchy as a dead animal, media sources told CPJ. 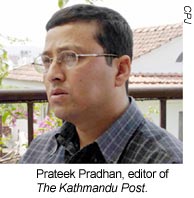 “We have heard from our reliable sources, they are trying to arrest us and prepare charges against us,” Pradhan told The Associated Press.

The two editors and Binod Raj Gyawali, director of Kantipur Publications which owns both newspapers, were called in for an informal talk about the cartoon by Kathmandu’s chief district officer on Monday. Upon arrival, however, they were asked to sign statements, which they refused to do without legal counsel, according to Guna Raj Luitel, the news editor of Kantipur who accompanied them to the meeting. The journalists were allowed to leave without signing but they expect to receive an official summons soon.

A government campaign to charge the newspapers appears to be underway. In today’s state-run daily Rising Nepal a highly critical article by the official news service National News Service called the publication of the cartoon a “mockery of free press” and quoted several people in the media as calling it “a complete violation of the law.”

Puspa Raj Pradhan, editor of Peoples Review, was quoted as saying that “legal action should be taken against journalism that violates the norms of multiparty democracy and constitutional monarchy,” and added that “journalism should not be above the constitution and law.”

Minister for Information and Communication Tanka Dhakal warned on Tuesday that “All media houses should be responsible for the news they disseminate,” the NepalNews Web site reported.

“We are disturbed by the official harassment and threats of arrest being made against our colleagues at Kantipur Publications,” said CPJ Executive Director Ann Cooper. “The threat of jail for editors from the country’s leading media group sends an ominous message to the local press and the international community. We call on the King to stop harassment of the Kantipur group and its journalists, and to roll back all of the restrictive measures that continue to limit the free press in Nepal,” she said.

A restrictive media law which would limit ownership of multiple news outlets, codify wide bans on reporting, and increase the punishment for publishing banned material has been pending since May but could now be revived, observers say. Bans on reporting deemed critical of the king or supportive of a Maoist insurgency were implemented when King Gyanendra dismissed the multi-party government and declared a state of emergency on February 1. Though the state of emergency was lifted in April, many of the restrictions are still in place, including a total ban on FM radio news.

Government efforts to close radio station Nepal FM 91.8 continued yesterday when the government asked the Supreme Court to quash its August 10 interim order which barred the Ministry of Information from taking legal action against the station, Kantipur reported. Both parties were summoned to appear before the court within the week.

Read more about the Ministry of Information’s attempt to revoke Nepal FM 91.8’s license in retaliation for the airing of news programming,

Read the report of the International Press Freedom and Freedom of Expression Mission to Nepal, July 2005.