June 2, 2005, New York, NY—The Committee to Protect Journalists strongly condemns the murder of Lebanese columnist Samir Qassir, who was killed in a car bombing outside his home in Beirut’s Ashrafiyeh neighborhood this morning.

Qassir, a prominent columnist for the Lebanese daily Al-Nahar, died when his car exploded after he started the engine, international news agencies reported. The Associated Press, citing Lebanese police, said that the bomb had been placed under the driver’s seat of the car.

In his popular newspaper column, Qassir was a vigorous critic of Syria, its Lebanese allies, and Syria’s 29-year military and political presence in Lebanon, which ended with the withdrawal of troops this April. He was threatened and harassed for his outspoken writing. 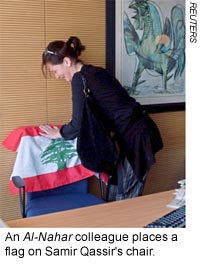 In 2001, Lebanese security agents confiscated Qassir’s passport in response to his editorials criticizing the Lebanese army and security services. His passport was eventually returned, but authorities said they were investigating the legality of his Lebanese citizenship.

“Today, we mourn the loss of an immensely brave journalist who was deeply committed to independent journalism and the principles of a free press,” CPJ Executive Director Ann Cooper said. “We are appalled by this shocking crime, and demand that those responsible are identified and swiftly brought to justice