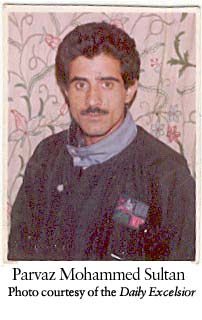 The Committee to Protect Journalists (CPJ) condemns the murder of journalist Parvaz Mohammed Sultan, editor of an independent wire service based in Srinagar, the summer capital of Jammu and Kashmir State.

On the evening of January 31, Sultan, editor of the News and Feature Alliance (NAFA), was shot dead by an unidentified gunman. Two men entered Sultan’s office at around 5:30 p.m., local time, according to news reports. After a brief conversation with Sultan, one of the men shot him in the head. The Associated Press (AP) news agency reported that the killer used a pistol equipped with a silencer. No one stopped the assailants from leaving the premises, which is located in the press enclave in central Srinagar.

Though Sultan was rushed to the hospital, doctors declared the journalist dead within minutes of his arrival, police told the AP.

Sultan, 36, was known as an independent journalist who had worked for several local Urdu-language dailies during his career. In addition to running NAFA, he contributed investigative stories and columns to the Urdu-language newspaper Chattan, one of the oldest newspapers published in Kashmir.

Journalists working in the disputed territory of Kashmir, which is claimed by both India and Pakistan, have long been vulnerable to attack by various parties to the conflict. Sultan’s colleagues told CPJ that though they were not aware of any specific threats against Sultan, wire service agencies such as NAFA are under constant pressure to carry statements issued by competing political and militant groups.

Police blamed the murder on militant groups but have not yet carried out a thorough investigation. No group claimed responsibility for Sultan’s murder, and many of the leading militant organizations, including Hezb-ul Mujahedeen, condemned the murder, as did the All Parties Hurriyat Conference, the main separatist alliance.

Kashmiri journalists expressed frustration that Sultan’s murder would remain unsolved, like the cases of other slain colleagues. According to CPJ’s records, nine other journalists have been killed in Kashmir since 1989, when the conflict there became a full-fledged civil war. No one has been brought to justice for any of these killings.

As a nonpartisan organization of journalists dedicated to the defense of our colleagues worldwide, CPJ urges Your Excellency to ensure that a vigorous investigation is undertaken so that Sultan’s killers may be brought to justice. All journalists are vulnerable when attacks against the press can be committed with impunity.

CPJ respectfully asks to be kept updated about the status of the investigation into the murder of Parvaz Mohammed Sultan.

We thank you for your attention to this urgent matter and await your response.