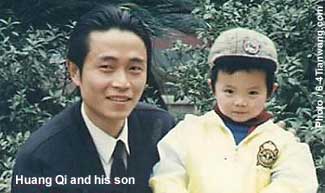 The Committee to Protect Journalists (CPJ) is outraged by the continued detention of Internet publisher Huang Qi, who was arrested on June 3, 2000, and today completes two years in prison. Although Huang was secretly tried on August 14, 2001, authorities have not yet delivered a verdict in his case.

The site soon became a forum for users to publicize abuses of power by local officials and to post articles about a variety of topics, including the June 4, 1989, military crackdown on peaceful demonstrations in Tiananmen Square, the independence movement in the Xinjiang Uighur Autonomous Region, and the banned spiritual group Falun Gong.

In December 1999, Huang published an investigative report about labor abuses committed against workers whom the local government had sent abroad, according to an open letter Huang wrote from prison in February 2001. While several domestic newspapers subsequently investigated and published stories on the case, local officials began threatening Huang and repeatedly interrogated him about his reporting.

On June 3, 2000, public security officials came to Huang’s office and took him into custody. In January 2001, while still in detention, he was charged with subversion. On August 14, 2001, the Chengdu Intermediate Court tried Huang in secret without pronouncing a verdict.

Huang has been beaten in prison and once tried to commit suicide, according to his open letter. His family members, including his wife and young son, have not been allowed to visit or communicate with him since his arrest two years ago.

Your Excellency’s government currently imprisons 35 journalists–more than any other country in the world. As a nonpartisan organization of journalists dedicated to the defense of our colleagues worldwide, CPJ calls for Huang Qi’s immediate and unconditional release.
Furthermore, CPJ respectfully reminds Your Excellency that China has signed the International Covenant on Civil and Political Rights, under which your government is obliged to ensure that citizens are free to seek, receive, and impart information and ideas of all kinds without government interference.
Thank you for your attention to this important matter. We await your response.