We, the undersigned organizations, are deeply concerned about the state of freedom of the press in the Kingdom of Swaziland. Over the past nine months, media workers in Swaziland have experienced serious attacks on their right to freely report on matters in the Kingdom, consequently undermining the right of Swazi citizens to receive and impart information as enshrined in Article 19 of the Universal Declaration of Human Rights. 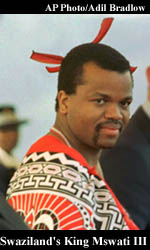 This week, journalist Bheki Makhubu, formerly a news editor for the private publication Times Sunday, will appear at the Mbabane Magistrate Court on charges of criminal defamation, stemming from a story he wrote in his newspaper’s September 12, 1999 edition. In this article, Makhubu stated that the King’s then bride-to-be, Princess Liphovela, was a high school dropout. Although the facts were not in dispute, the article sparked public outcry against the journalist and his newspaper for their alleged show of disrespect for the Monarchy.

We are deeply disturbed by the fact that Bekhi Makhubu could now face a jail sentence for simply performing his professional duties as a journalist. The charges against Makhubu are out of line with internationally accepted norms, which hold that disputes involving the media and/or media workers in the exercise of their profession should be tried under civil, not criminal, codes.

We accordingly call on the Directorate of Prosecutions in Swaziland to urgently and unequivocally drop the charges against Makhubu. This will confirm the Government of Swaziland’s commitment to respect journalists’ right to receive and impart information without fear of reprisal.

In another case earlier this year, several dozen media workers in Swaziland were forced out of their profession. On February 17, over 80 journalists lost their jobs as a result of the abrupt closure of the Swazi Observer Group of papers; today most of these journalists remain without work or compensation. According to our research, the media group’s management closed down operation of the paper in retaliation for the refusal by some editorial staff to reveal sources for two December 1999 articles on Swazi police activities. The closure of the Swazi Observer Group of papers, we believe, is part of a campaign aimed at rooting out critical or dissenting voices in Swaziland.

We also are concerned by the actions against journalists by traditional authorities. Traditional chiefs in Swaziland have on more than one occasion summoned and castigated journalists, or warned them against reporting on matters of legitimate public interest, particularly those pertaining to the Monarchy.

These issues are compounded by the fact that a 1973 royal decree suspended Swaziland’s Constitution, leaving the country without legal protections for freedom of the press. A constitutional review process is underway, but the media have been banned from reporting on its proceedings. We urge you to immediately end this ban and to allow full media coverage of the constitutional review process. Such coverage is vital for public discourse on this crucial process, which can help build safeguards that will protect freedom of the press in the future in Swaziland.

We, the undersigned organizations, will continue to support calls for complete freedom of expression and the press in the Kingdom of Swaziland and will continue to expose and report on violations of these rights to the world.