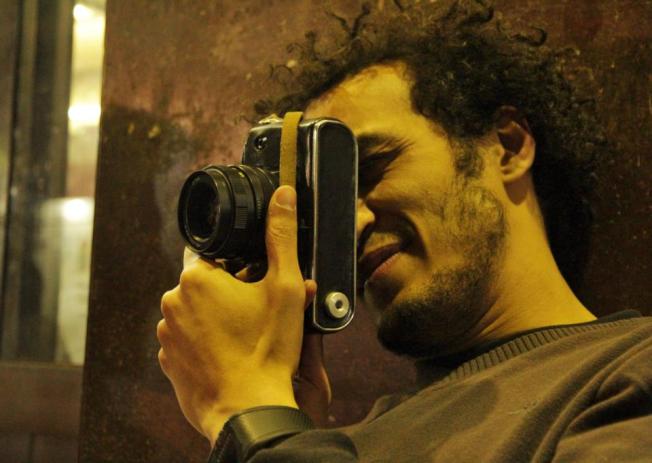 CPJ welcomes the release of Egyptian photojournalist Mahmoud Abou Zeid, also known as Shawkan, on March 4, 2019, after over five and a half years of arbitrary detention on anti-state charges. Despite walking out of jail, Shawkan is still not entirely free. For five years, the photojournalist will have to appear at a police station every day at 6 p.m., and will also be prohibited from managing his financial assets and properties. CPJ calls for the immediate removal of all conditions to his release.

Mahmoud Abou Zeid, an Egyptian freelance photographer known as Shawkan, was detained while covering clashes between Egyptian security forces and supporters of ousted President Mohamed Morsi during the dispersal of the pro-Morsi sit-in at Raba’a Al-Adawiya in Cairo, according to news reports.

He was first held in a Cairo stadium with other protesters and foreign correspondents who were released the same day.

Shawkan contributed to the U.K.-based citizen journalism site and photo agency Demotix and the digital media company Corbis. After his detention, Demotix sent a letter to the Egyptian authorities confirming that Shawkan had been covering the clashes for the agency, the photographer’s brother, Mohamed Abou Zeid, told CPJ.

In September 2013, the Egyptian general prosecutor’s office extended the journalist’s pre-trial detention, his brother told CPJ. Mohamed Abou Zeid told CPJ in 2014 that his brother’s lawyer and the legal team at the Arab Network for Human Rights Information had appealed for his release. The appeal was denied.

On May 14, 2015, Shawkan appeared before a judge for the first time since his arrest, according to news reports. The judge renewed his pre-trial detention, according to the Freedom for Shawkan campaign. The journalist, whose lawyer was not present in court, told the judge about his arrest and denied the allegations against him.

In September 2015, after more than two years of pretrial detention, Shawkan’s case was referred to a Cairo criminal court for trial. The photographer was charged with weapons possession, illegal assembly, murder, and attempted murder, according to court documents. The trial was ongoing in mid 2017, and included more than 700 defendants.

During a trial session on October 8, 2016, the prosecution aired footage of anti-government protests in 2011 and 2012 as evidence against the defendants, Shawkan’s lawyer, Taher Abou Nasr, told CPJ. None of the footage shown was of the Raba’a sit-in where Shawkan was arrested.

Shawkan is being held at Tora Prison. He has been diagnosed with Hepatitis C and his health has deteriorated in prison, the journalist’s family told CPJ.

The journalist was a recipient of CPJ’s International Press Freedom Awards in 2016.

In a letter Shawkan wrote to mark his 600th day in jail in April 2015, he describes the abuse he suffered since his arrest and urged advocacy on behalf of detained journalists in Egypt.

In December 2016, Shawkan’s lawyer demanded the journalist be released on health grounds and requested a medical examination, the journalist’s brother told CPJ. The report, which was released during a May 20, 2017 court hearing, said that Shawkan does not suffer from any health conditions and does not qualify for an early release, his brother said.

Tweet: #Egypt still ranks among the worst jailers of journalists worldwide. Egypt should #FreeShawkan and all journalists behind bars #FreethePress