“Tell them not to kill me!” pleads a man in the opening lines of a fascinating tale of violence with the same title by one of Mexico’s most esteemed writers, Juan Rulfo. It is, sadly, the same cry for help that Mexican journalists are sending out to the world today. On Tuesday, October 19, prominent writers and journalists from Mexico and the United States will gather in New York for “State of Emergency: Censorship by Bullet in Mexico,“ an evening of readings and discussions about the threats facing members of the Mexican press who report on drug-related violence. 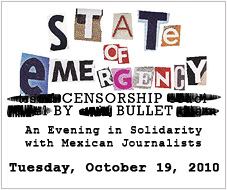 More than 30 journalists have been murdered or have gone missing since December 2006, when President Felipe Calderón Hinojosa came to power. CPJ has confirmed that at least eight of these journalists were killed in reprisal for their work.

A joint delegation to Mexico from CPJ and the Inter American Press Association last month resulted in a pledge by Mexican President Felipe Calderón Hinojosa to push for legislation that would make attacks on journalists a federal crime. Earlier in September, CPJ released a special report, Silence or Death in Mexico’s Press, about attacks on the media by criminal organizations and the government’s weak response.

With this event, the PEN American Center, the PEN Club de México and CPJ express their support for Mexican journalists and the citizens of Mexico, who deserve unfettered access to information about the developments and decisions that shape their lives.

Gypsy Guillén Kaiser is CPJ’s advocacy and communications director. Born in the Dominican Republic and raised in New York, she began her career as a journalist after graduating from New York University.